Bishop Brendan Kelly has written to say thanks for your contributions to the recent Trócaire East Africa emergency collection:

The returns so far received from parishes across the diocese reveal that there has been an outstanding response to the Trócaire Emergency Appeal for East Africa on the weekend of 6th/7th November. This is good news at a time of much uncertainty on so many fronts, and so good to see as we enter Advent, the season of promise and of hope unborn. We too must be agents of salvation for others, beginning in the here and now. Very many parishioners have chosen to be so, with great generosity, in response to this unfolding devastation for our brothers and sisters across five countries in East Africa. I write to say a simple ‘Thank you’. The Saviour born to us at Christmas will bless and reward you.
Bishop Brendan Kelly
Bishop of Galway & Kilmacduagh & Apostolic Administrator of Kilfenora

Please note that the Wednesday morning Mass in Ballinderreen is now at 9.15am.

Please note that the Wednesday morning Mass in Ballinderreen is now at 9.15am.

9am, Doorus: People of Kinvara Parish.

Tuesday 23rd November, 7pm, Ballinderreen: Those whose funerals took place in Ballinderreen Church over the past twelve months.

Mass will be celebrated for those whose funerals took place in the Churches of Kinvara and in Ballinderreen Parishes over the last twelve months.
The Mass for Kinvara Parish will be this Wednesday 17th November 2021 in St Joseph’s Church, Kinvara, at 7pm.
The Mass for Ballinderreen Parish will be on Tuesday 23rd November 2021 in St Colman’s Church, Ballinderreen at 7pm.
Family members are invited to attend the Mass.
Here are the lists of those whose funerals took place in the parishes in the past year. If there are any mistakes or omissions from the lists, please let us know and we will correct them.
Kinvara Parish:
Kate Kelly, Tommy Maguire, Kieran Corless, Teresa Linnane, Martha Neylon, Michael Hastings, Róisín Hayes, Paddy Murray, Una Murphy, Bridget Donohue, Solveig West, Nora Glynn, Mary Moroney, Peter Watters, Berna Lynch, Michael Deeley, Bernie McInerney, Tommie O’Hanlon, Ann McHugh, Mary Keogh.
Ballinderreen Parish:
Billy Carr, Patsy Fawl, Michael Organ, Rita Meehan, Seán Burke, Michael Linnane, Barry Coen, Patrick Quinn, Patrick Bermingham, Mary Ann Kealy, Bernie O’Connor, Pete Lane.
May their souls, and the souls of all the faithful departed, through the mercy of God, rest in peace.
(Unfortunately, this year, we won’t have the cup of tea afterwards due to the virus concerns, but hopefully we can return to that custom next year.)

Miko Fahy and Ambrose McNulty, Nogra, anniversary and deceased members of the Fahy and Quinn families.

10.30am, Ballinderreen: November Lists of the Deceased Novena.

7pm, St Joseph’s, Kinvara: Those whose funerals took place in Kinvara Parish in the past 12 months.

The Bishops of Ireland have called for a national Church collection on the 6th and 7th of November to support Trócaire in providing life-saving aid to vulnerable communities in East Africa and DRC, where millions of people are being pushed to the edge of starvation.
Trócaire teams are already responding on the ground, and are ready to provide more life-saving assistance but need more resources. Any support the Parish can give to this Emergency Appeal will help the urgent work of Trócaire and their hardworking local partners. For more information see www.trocaire.org
There will be a basket at the back of the Churches this weekend into which you can place donations. Thank you.

9am, Doorus: November Lists of the Deceased Novena.

10am, St Joseph’s, Kinvara: November Lists of the Deceased Novena.

7pm, St Colman’s, Kinvara: For those buried in Mountcross Cemetery and other cemeteries in Kinvara Parish.

10.30am, Ballinderreen: November Lists of the Deceased Novena.

As the virus situation did not favour the celebration of Masses in the cemeteries during the Summer, instead for this year, we will have the Masses as part of our November prayer for the dead. With the deterioration in weather conditions at this time of year, Masses will be celebrated in the Churches for those buried in the cemeteries, and Fr Hugh will bless the graves in the days leading up to the Mass.
The dates are as follows: 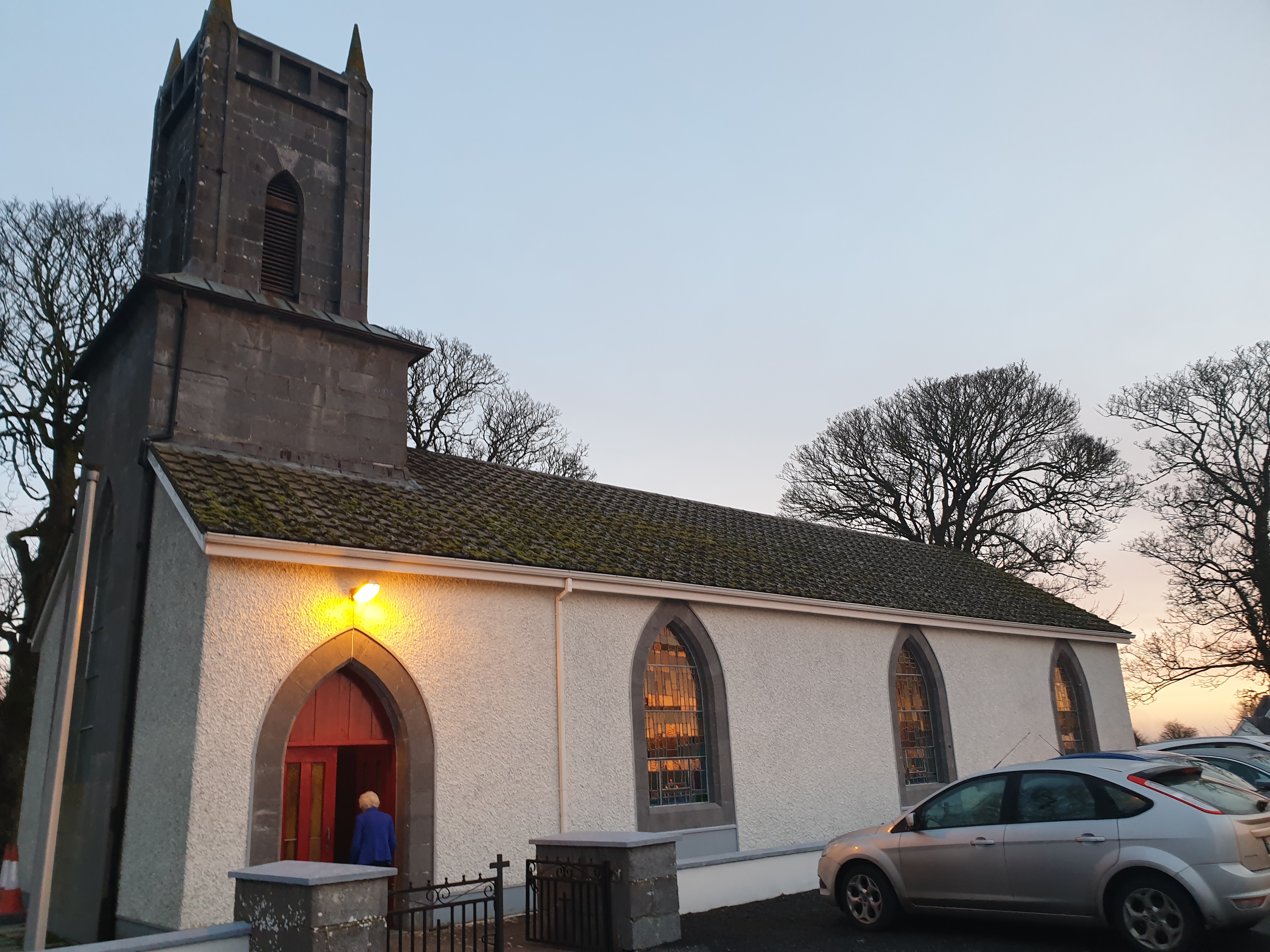 For Doorus and Parkmore Cemeteries: Friday 26th November at 7pm in Doorus Church.
The Mount Cross and Drumacoo cemetery committees will hold collections in conjunction with the Masses, for the costs involved in the upkeep of the cemeteries, and it would be good to support them, considering that no collections have been possible during the whole pandemic period.

On the Solemnity of All Saints, 1st November 2021, Mass will be celebrated in St Joseph’s Church, Kinvara at 10am and in Ballinderreen Church at 7pm.

A Saint is ‘a person who, after having lived a life of virtue, dies in the state of grace and has been granted the reward of eternal life by God. The saints enjoy the beatific vision and unceasingly intercede for those still in earthly life. They also serve as a model and inspiration to us.’ – Irish Catholic Catechism for Adults, p.567 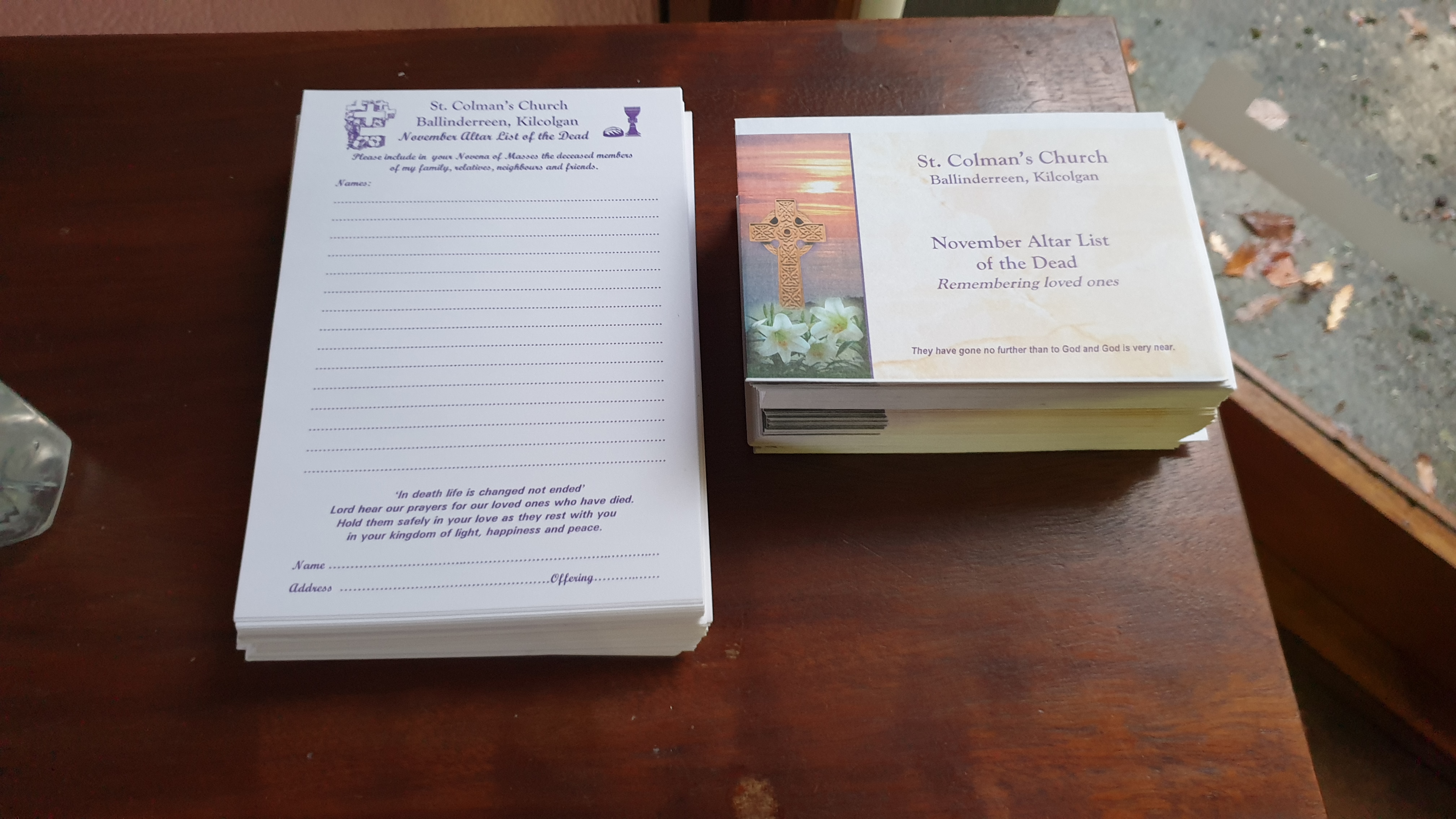 Please note: Check "Mass Times and and Intentions" on the newsletter for up-to-date information on daily Masses