Good news: Following this evening’s government public health announcement, congregations can return to Mass from this Tuesday, 1st December 2020. We are required to implement the restrictions that were in place when we last had Mass, i.e. 2m distancing between each person, except members of the same household, and a limit of 50 people in the Church (with a few extra in the transcepts of St Colman’s Church, Kinvara). Face coverings now must be worn in Church.
We will make a big effort for what we hope will be the final months of Covid-19 restrictions, and our wonderful volunteers for sanitising and stewarding will go back into action. Please consider volunteering in order to spread the work and share the load. The volunteers have made it possible for our Churches to satisfy the requirements and keep everybody safe, so they have done a huge service to the Lord and to the people of these parishes. To join them in volunteering in any of the Churches, please contact Fr Hugh or the Parish Office.
The Mass times of the temporary schedule for the time of the pandemic will resume, in order that people can spread through the week for Mass because the 50 person limit means everybody can’t come on Sunday. The times are: Tuesday 7pm Ballinderreen; Wednesday 7pm Ballinderreen; Thursday 7pm St Joseph’s Kinvara; Friday 7pm St Joseph’s Kinvara; Saturday Vigil – 7pm St Joseph’s Kinvara and 8.15pm Ballinderreen; Sunday – 9am Doorus, 10.30am Ballinderreen, 12noon St Colman’s.
Therefore we can start having a congregation from 6pm Adoration and 7pm Mass in Ballinderreen this Tuesday.
A Christmas Eve / Christmas Day idea is being worked on and an announcement will be made when it is ready.
In the meantime, let’s do our best this Advent to prepare our hearts to celebrate the birthday of Jesus our Saviour at Christmas.

For this weekend’s Masses, while congregations are still not permitted in Church, there will be one Saturday evening Mass at 7pm and one Sunday Mass at 10.30am, both streamed online. Once congregations are permitted at Mass again from Tuesday 1st December 2020, though with restricted numbers and 2m physical distancing (except between members of the same household), we will resume the temporary Mass schedule for the period of the pandemic.

Ambrose McNulty and Miko Fahy, Nogra, and the deceased members of the Fahy and Quinn Families, anniversary;

Sun 29th Nov, 10.30am (no congregation): Parish November lists of the deceased

Each year, Ballinderreen Parish holds a collection of non-perishable foods for SVP in the run-up to Christmas. However, this year, SVP will hold a virtual food appeal instead. Here is their message:
‘Due to the Coronavirus restrictions, we have had to make some changes this year. Unfortunately, we will not be able to accept donations of physical toys and food, as we cannot guarantee we would be able to deliver them safely to families in time for Christmas.
But this year, more than ever, we still need your help to make sure that children and families have what they need to share in the magic of the season. We are asking people to support families through our Virtual Food Appeal.
On our website, you can purchase a hamper so some essential food items and Christmas treats can be given to people in your community. You can choose to donate a virtual hamper to one person, two people, or a family, to help them this winter and beyond.’
Donations can be made via this link:
https://www.svp.ie/appeal-2020/food-appeal.aspx

Again this week, due to the government Level 5 Covid-19 restrictions, Masses will be online only, i.e. without a congregation. If you prefer to change a Mass intention booking, that will be no problem. Just make contact.

Sunday 22nd Nov, 10.30am: Those whose funerals took place in Ballinderreen and Kinvara Parishes since this time last year.

Ambrose McNulty, Miko Fahy, Nogra, and the deceased members of the Fahy and Quinn families, anniversary;

Sunday 29th November, 10.30am: Parish November lists of the deceased.

The 10.30am Mass this Sunday, 22nd November 2020 will be offered for those whose funerals took place in the Churches of Ballinderreen and Kinvara Parishes during the past twelve months.
Unfortunately, because of the Covid-19 restrictions, we are not able to invite the families of those who died to be present at the Mass, but you are invited instead to join in spiritually, with the help of the live-streaming of the Mass on this Facebook page.
Those for whom the Mass will be offered for are:
Ballinderreen Parish: Breandán Ó Madagáin, John Lane, Pat Lane, John Martyn, Michael Kelly, Joe Connolly, Mary Dwyer, Breeda Callanan, Micheál Linnane;
Kinvara Parish: Stephen Warde, Micheál MacMahon, Monica Forde, Rose Glynn, Willie Kavanagh, Maura O’Loughlin, Bernadette O’Connell White, Killian Staunton Touris, Bridie Hynes, Kathleen Carty, Claire Wenger, Bridie O’Connor Palmer, Michael Carrell, Mary Walsh, Patrick Martin Conole, Paul Manning, Breda Quinn.
(If anybody spots any omissions from the list, please make contact.)
A Mass will be celebrated and live-streamed for those who died in Blake Manor Nursing Home, Cloughballymore, Ballinderreen Parish next Wednesday, 25th November 2020 at 3pm.
May the souls of the faithful departed, through the mercy of God, rest in peace.

Sunday 22nd Nov, 10.30am: Those whose funerals took place in Ballinderreen Parish and Kinvara Parish since this time last year. 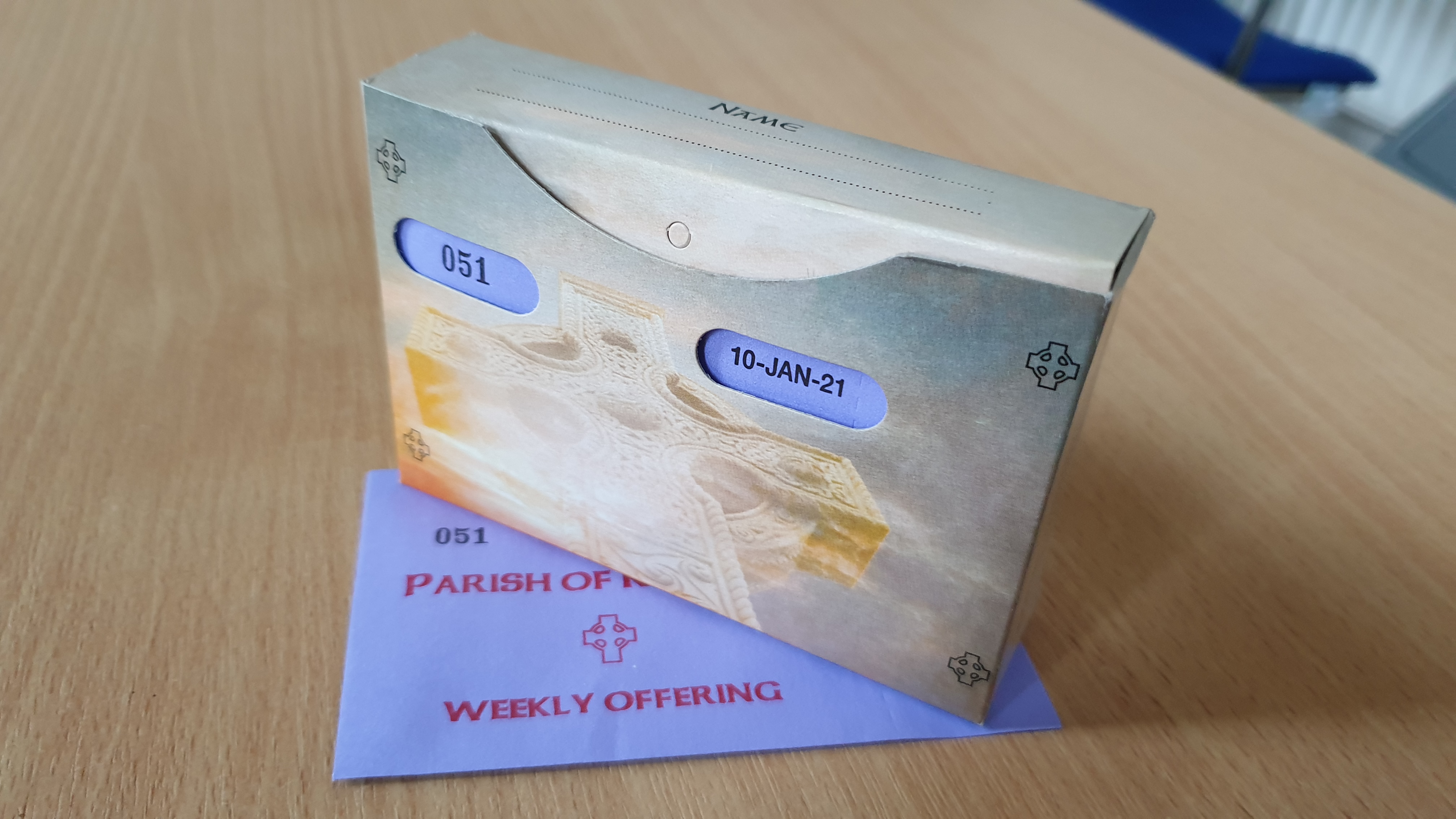 The parish envelope boxes for 2021 are being prepared at the moment. Please consider joining the envelope system if you are not already receiving a box each year. To receive a box, please email your name, address and telephone number to bkoffice@parishes.galwaydiocese.ie or telephone 086 85 77 644.
(Only those who have not received a box in previous years need to do this. If you are already registered for the system from previous years, you will receive a box again this year.)
Sincere thanks to those who are using the envelopes, and leaving them in during the Covid shutdown. These contributions have ensured that the parishes have not fallen into financial difficulty so far. Using the envelopes also facilitates the parishes in availing of the Revenue tax-back, which is a good help.

May their souls, and the souls of all the faithful departed, through the mercy of God, rest in peace.

Please note: Check "Mass Times and and Intentions" on the newsletter for up-to-date information on daily Masses